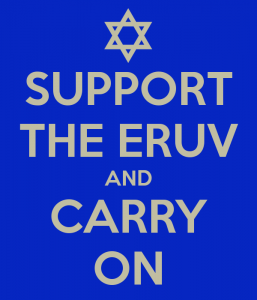 In my Current Jewish Questions series we recently completed a three part sub-unit covering a basic introduction to the laws of eiruvin. For those interested in a general overview of the laws of eiruvin, I am collecting the links in this convenient post. Note that since this is an introductory class it does not cover many of the technicalities which affect the practical validity of any communal eiruv. In other words, do not confuse listening to this series as semikhah with which you can now pasken eiruvin for your (or anyone’s) community.

Part 1 – General Overview: Discusses the innovation of the eruv, its origins and the basics of what it accomplishes.

Part 2 – Physical Corrections: Covers the tikkunim or physical corrections one must make to an area as a prerequisite for establishing an eiruv.

Part 3 – Coming Together: Explains the requirement for 100% communal participation, as well as several solutions when that proves impossible.

Rabbi Josh Yuter’s Current Jewish Questions series returns with the first of a three part introduction to the laws of eruv.

Since I moved down to the Lower East Side I have received more questions on Eiruvin than anything else. From conversations with many Jewish residents in the area – both members and non-members of my congregation – there is a great deal of interest and desire to have an eiruv erected on the Lower East Side. Setting aside the economic and political obstacles of putting up and eiruv down here, I decided that the best thing to do is simply to teach the basics of eiruvin in terms of how they work in halakha.
The intent of these shiurim is not to get people to the level of pesak and as such we did not explore the vast teshuva literature on the subject. Rather the goal was to provide working definitions and explain the laws and principles underlying the various halakhic disputes. Most sources are from the Talmud, Rambam, and Shulhan Aruch.
I decided to split this shiur into three parts:

All three shiurim have been added to YUTOPIA’s Source Sheet Archive.
As always, comments and corrections/suggestions are welcome!

Last night, Mt. Sinai hosted an evening with R. Ben-Zion Wosner, the “rabbinic advisor” of the new Washington Heights Eruv. On the whole the evening was light on the halakhic details of eruvin, but focused more on addressing and mitigating the communal disagreements with the Eruv. The Breuer’s community has long been opposed to the Eruv and there are authorities such as R. Moshe Feinstein who hold that there cannot be an Eruv at all in Manhattan.
R. Wosner was extremely cordial and concilliatory and basically said that the Eruv follows “rov poskim,” and no one has to use the eruv if they don’t want to. R. Wosner continued to appeal to the amorphous “rov poskim” in the question and answer session, but given the circumstances I’m not sure he could have done more. Considering the communal tensions and the diverse educational background of those in attendance, a detailed shiur in Eruvin would not have been well received or appreciated and not entirely appropriate.
In terms of what halakhic content I did hear, I was not always in agreement, but again, his intent was more to quell communal tensions. For example, one woman asked why/how he could rule on the community’s Eruv when other Rabbis in the community would not. R. Wosner responded that like being asked a question in tzitzit, as a rabbinic advisor he could give halakhic advice which is not bound by geography. Although the question raised a serious issue of mara de’atra and local authority, R. Wosner would not have had the time to give a more detailed answer.
All things considered, the shiur went over very well and was extremely well attended for a Monday night. I also think R. Wosner and R. Schnaidman should team up more often, but that’s a different story.

Personally, I will not be using the eruv for reasons which apply to just about every eruv I’ve seen. I did ask R. Wosner one question, but was not impressed with the truncated answer he was forced to give. There is one more Rabbi I wish to consult before I post in detail my thoughts on Eruvin.