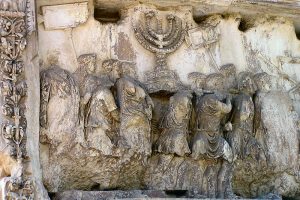 As we approach Tisha B’Av, arguably the most tragic day in Jewish history, it is common for Jews to explore the religious causes for the destruction of Jerusalem and the Holy Temple. After all, the hurban, was cataclysmic for the Jewish people politically and religiously as we lost both our sovereignty in becoming exiles and our Temple through which we connected with God. And if such a cataclysm was the result of transgressing particular sins, then these sins must be among the most grievous, and thus the most urgent in need of correcting.

According to the Talmud in B. Yoma 9b, the sins which caused the destruction of the First Temple were idolatry, forbidden sexual relations, and murder. The severity of these sins is well documented in Jewish law as all of them are not only capital offenses, but they are known as יהרג ואל יעבור/yeihareig v’al ya’avor – sins for which one ought to let oneself be killed rather than violate.1

Regarding the destruction of the Second Temple, the Talmud in Yoma continues that even though the Jews were engaged in Torah study, fulfilling the commandments, and performing acts of kindness, the Second Temple was destroyed because of a שנאת חינם/sin’at hinam or “baseless hatred” throughout the nation.2 This demonstrates that the sin of baseless hatred is just as severe as the sins of idolatry, sexual transgressions, and murder since all of these transgressions were responsible for the destruction of the Temple and the exile of the Jewish people.

In my experience, most Jews are familiar with the reasons for the destruction given in B. Yoma 9b, and why it’s common to find much discussion over the harms of “baseless hatred”3 around this time of year.4

But the Talmud records additional reasons given for the destruction of Jerusalem which are rarely discussed. Here is a sample of some of them from B. Shabbat 119b: