Well, look what we have here.

Yes, it’s been a long time since I’ve posted anything here, even longer since I’ve been writing. Well, writing long-form, anyway. I realized that I’ve been taking an “easier” way out in moving ideas to Twitter, which while nice for its format has its limitations. I think it’s been better than nothing, but I think it’s time I get back to trying harder.1

And as a nice push for me to get writing again, you’ll notice the website has been completely redone! We’ve got a host, a new theme and new host for faster loading, and SSL if you care about that sort of thing.2

You’ll also notice that the 10 Year Anniversary logo has been replaced with a 15 year one, because that’s how time works. For those who can’t really believe I started 15 years ago, I’ve included a slideshow of how the site has changed over the years.

I don’t anticipate a regular publishing schedule (let’s not get crazy here), but I think I’d like to go back to having this site as a medium for me to develop and work out ideas which have been on my mind.

And there have been many, many things on my mind.

By now anyone who would find this website should be familiar with the “Facepalm” and “FAIL” memes. The former is usually a response to a stupid or ignorant statement made with earnestness and sincerity, while the latter generally applies to all sorts of blunders. A few years ago I created a kind of portmanteau of the two, specifically for use in unproductive Jewish religious conversations online which I helpfully dubbed the “Fail Rav” or “#FailRav.” The title picture for the movie Lonely Man of Faith and the book Divrei HaRav, provided a particularly appropriate portrait of R. Joseph B. Soloveitchik for this purpose:

With the help of some meme generators I stamped the requisite “FAIL” subheading and uploaded it to a now defunct image sharing site. Lest the internet lose another irreverent meme, I recreated a collection of Fail Ravs which you’re free to use as you see fit. 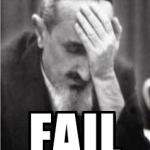 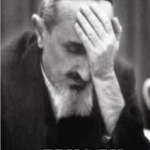 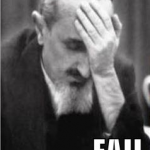 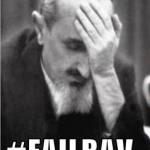 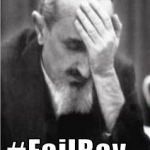 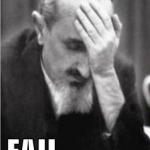 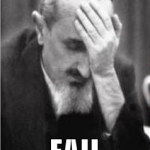 I can’t believe it’s been three years since I last did a pre-Purim Poem. Anyway, I dug deep for this year’s sermon and I even upped the complexity beyond the simple rhyming couplets.
Even manged to throw in some bilingual rhymes again too. I love those.
[Continue Reading...]

Many thanks to all listeners and subscribers; I hope you’ve enjoyed listening to my shiurim and classes as I’ve enjoyed giving them.

Ever feel like Jewish “outreach professionals” all regurgitate the same condescending sanctimonious pablum? Instead of feeling infantalized, have some fun with your friends by playing Kiruv Bingo! You know the rules, you know the rabbis, just play along!

I’ve been following the Sarah Palin bus tour “story” with the same cynicism and disdain as Jon Stewart. But the thought occurred to me that perhaps I had seen this sort of thing before somewhere. And after rummaging through the vault of irrelevant data that is my brain, I uncovered what can only be described as a revelation.

Loyal readers, I submit that Sarah Palin is the modern day Lex Luger.

Following the precedent set last year, my sermon for the Shabbat before Purim was delivered in rhyming couplets. I’m also pleased to report this one was equally well received

It’s Purim again and you know what that means.
It’s time to revisit our Purim routines.

We’re laugh, we sing, and we put on a spiel
One day to have fun – so what’s the big deal?

God saved us again, this time through means hidden
And where does it say letting loose is forbidden?

We all know by now how the story begins
But consider the question – just when did we win?

It involved Achashverosh getting drunk one more time
Which it seems is as easy for this Rabbi to rhyme.

And yet they took arms to fight for their lives
And because of their courage, our people survives

So why were they frightened – what need to be scared
Of a people for whom the king barely cared?

And when banded together to fight for what’s right
Few forces can stop us, no matter their might

There are all sorts of reasons and tired excuses
For ignoring one’s pain and recurring abuses.

It’s too big, too hard, our opponents too massive
There’s no need to act, I’ll just sit and be passive

On Purim at least – for one day, or two
We put those aside for what we had to do

When we join together, united as one
There is no evil we cannot overcome

Unique to Purim, for all lessons learned
Is that sometimes our comfort and cheer must be earned

They reaccepted the Torah with total free choice
And only after committing, were they free to rejoice

I know what you’re thinking, 500,000 is nothing by today’s standards – even for Jewish blogs – and especially since I’ve been doing this since May 15th, 2003. However, consider the following:

Finally, the 500,000th visit is not the same as a “hit” – as the chart below indicates most visitors to YUTOPIA stick around for a while, either taking time to read what I’ve written or downloading some of the chords from the archive.

At any rate, I hope to continue keeping up the quality you’ve all come to expect both in the posts and now the podcasts which I am proud to say have already amassed approximately 5,000 downloads in total.

I thank you for your support and sticking with this site, even sometimes more than I have, and for putting up with my typos and grammar. I don’t have the time for a complete retrospective right now, though I suspect one should be due at some point. In the meantime, thanks again for helping this site achieve a Big Round Number and I look forward to reaching even more with you in the future.

1. At least since I started counting with Sitemeter – with all the changes I’ve made in the past, odds are I hit the mark a while ago.

Happy to say that after a minor hiccup the move to a new host went swimmingly. We now return to our regularly scheduled blogging.

YUTOPIA is moving hosts, so please excuse the forthcoming hiccups in the process. If this works, we’ll be good for the next 4 years.