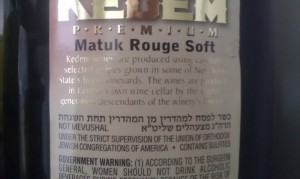 With Passover just a few weeks away, many Jews are stocking up wine for the seder’s four cups per person. One question which I often receive is to explain the halakhic distinction between “yayin mevushal” or “cooked wine” and non-mevushal wine.

The most well known halakhic implication of yayin mevushal is with regards to wine touched by non-Jews, otherwise known as “stam yeinam.” As Maimonides describes in Ma’achalot Assurot 11:3, if a non-Jew touched wine but one is uncertain if in doing so he designated it for idolatrous sacramental purposes, the wine is rabbinically forbidden. However, a common dispensation for this prohibition is if the wine was cooked, even if a non-Jew were to come into contact with the wine, the rabbinic prohibition would not apply for cooking the wine disqualifies it for sacramental use.

Space and time do not permit a complete analysis of the opinions regarding stam yeinam. However, the connection between cooked wine and its suitability for sacramental use is already found in M. Menachot 8:6.

משנה מנחות ח משנה ו
אין מביאין לא מתוק ולא מעושן ולא מבושל ואם הביא פסול
M. Menachot 8:6
One may not bring sweet wine, or smoked wine, or cooked wine, and if one did so it is invalid.

Perhaps it is possible to assume that the same standards for a wine’s sacramental use are comparable for Jews and non-Jews, which would explain the application for stam yeinaim. However, the status of yayin mevushal also has implications for the Jewish ritual of Kiddush – sanctifying holy days.

B. Bava Batra 97a records an opinion that all wine for kiddush must be suitable to be used in the temple.

When we read this general qualification with the Mishna from Menachot cited above, we may conclude that the wine used for kiddush must not be mevushal, as Maimonides rules in Shabbat 29:14. However, as recorded in Shulhan Aruch O.C. 272:8, this specific requirement for only non-mevusal wine to be used for kiddush is disputed.

At any rate, the point of this post was simply to provide a very brief introduction to the implications of yayin mevushal. It appears to me that the very properties which make it advantageous for stam yeinam are exactly what makes yayin mevushal problematic for kiddush.